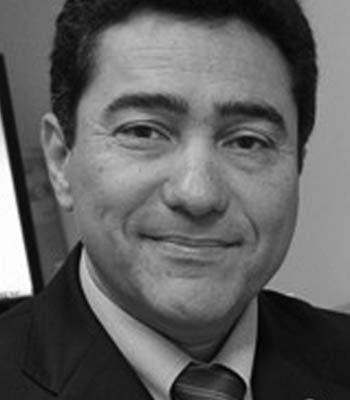 Ahmed A. Busnaina, Ph.D. is a University Distinguished Professor, the William Lincoln Smith Chair Professor, and the founding Director of National Science Foundation’s Nano scale Science and Engineering Center (NSEC) for High-rate Nano manufacturing and the NSF Center for Nano and Micro-contamination Control at Northeastern University, Boston, MA. Prior to joining Northeastern University, he was a professor and a director of the Micro-contamination Control Lab at Clarkson University from 1983-2000. Dr. Busnaina is internationally recognized for his work on nano and micro scale defects mitigation and removal in semiconductor fabrication. He specializes in directed assembly of nano elements and in the nano manufacturing of micro and nano scale devices. He developed many techniques for directed assembly and nano materials based manufacturing of nano scale structures for energy, electronics, biomedical and materials applications. His research support exceeds $47 million.

Busnaina has authored more than 600 papers in journals, proceedings and conferences, and he has organized and chaired more than 175 conferences, workshops, sessions and panels for many professional societies. He is an associate editor of the Journal of Nano particle Research. He also serves on many advisory boards including Samsung Electronics; Chemical Industry Nano materials Road map, International Technology Road map for Semiconductors, Journal of Particulate Science and Technology, Journal of Environmental Sciences, Semiconductor International, Journal of Advanced Applications in Contamination Control. He is a fellow of the American Society of Mechanical Engineers, and the Adhesion Society. His awards include a Fulbright Senior Scholarship, the 2006 Nano tech Briefs National Nano50 Award–Innovator category and the 2006 Søren Buus Outstanding Research Award–Northeastern University.